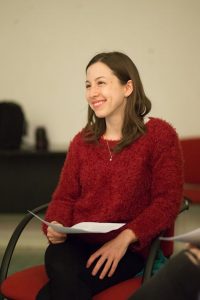 Ágnes is a social historian with a research focus on East Central Europe, migration and Jewish history. Her Ph.D. dissertation at the Central European University in Budapest investigated the connection between academic antisemitism, social mobility and migration through a sociological study of the “numerus clausus exiles” (students who left interwar Hungary due to the antisemitic law restricting Jewish access to higher education). Examining this interwar migratory movement of Jewish youth who were seen as refugees escaping antisemitism brought Ágnes to the topic of refugees in a more literal sense.

In the framework of the ”Unlikely refuge?” project, she aims to write a conceptual history of refugeedom in 20th century Hungary. Besides other topics, she is very intrigued to research the alternative system of refugee protection that socialist countries constructed after 1945 instead of joining the “Western” Geneva conventions on refugees (with the exception of Yugoslavia) and the role Hungary played in this system. Ágnes will particularly focus on the settlement of Greek refugees in state socialist Hungary, the ways in which Greek refugees were integrated in the Hungarian Workers’ Party but less in the larger society in the 1950s and how this changed after the violent suppression of the 1956 revolution and during the decades of “Goulash Communism” (1960s and 1970s).