Listen to the second episode of the “Eastern Europe’s Minorities in a Century of Change”, a podcast series on the history of minorities and minority experiences in twentieth-century Central and Eastern Europe prepared by the BASEES Stud soundcloud.com.

In this episode, Michal Frankl, principal investigator of the ERC-funded project “Unlikely refuge? Refugees and citizens in East-Central Europe in the 20th century” at the Masaryk Institute and Archive of the Czech Academy of Sciences talks to Matthew Frank, Associate Professor in International History at the University of Leeds about the mass displacement of minority populations in interwar Europe. Focussing primarily on the ideologies and actions of governments and international organizations, Matthew considers how such population transfers concurred with the nascent minority protection regime set out by the League of Nations and came to be widely accepted as a state-building mechanism for the newly established nation-states of Eastern Europe.

What are the synergies and differences in usage of various interviewing techniques in history and across social sciences? How will oral history […] 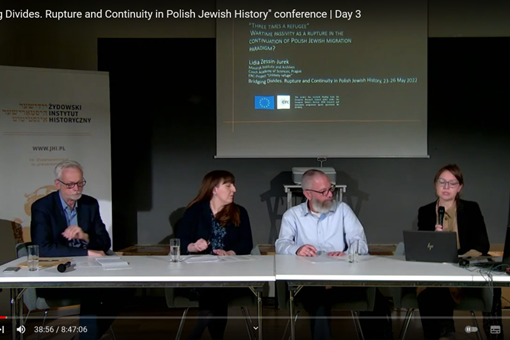 On 23-26 May 2022, Lidia Zessin-Jurek (Unlikely Refuge?) participated in a conference at the Jewish Historical Institute in Warsaw entitled Bridging Divides. […]